5/15  - The moderator of the Yaesu group banned CHRIS SMART VE3RWJ as written below. 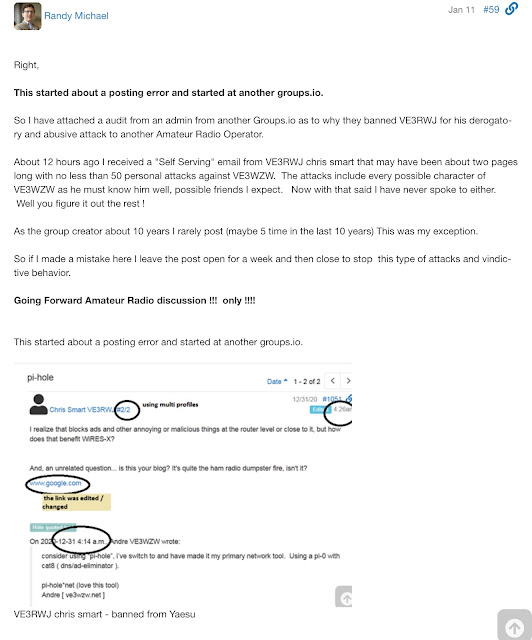 Many groups-io worldwide amateur radio members have contacted VE3W/ZW privately in disgust, for which he feels proud with the positive feedback.
ve3rwj is now blocked by VE3W/ZW and hope for zero association.
The moderator of the Yaesu groups-io  banned chris Not-smart ve3rwj because of his written remarks.  ve3rwj comments represents ignorance as a Canadian.
Summary:
Summary:
A posting error by VE3W/ZW at 4:15 am (the TIME was 4:15 morning), so One minute after VE3W/ZW posted to a groups-io Yaesu instead of the RaspberryPi group.
ve3rwj blasted out his message one minute after the posted message at 4:15 am ( morning ) with attacks, hungry to chat with someone, confrontational.   ve3rwj asinine As a Canadian Amateur in a Global groups-io with his toxic hatred.
VE3W/ZW Noticing the email posting error to Yaesu instead of RaspberryPi groups-io then composing a deletion request to the moderator within 3 minutes after the posted message to remove or delete from the wrong Yaesu groups-io instead of the RaspberryPI.
ve3rwj petty and child like message included, exist for all to read 5000 within the Yaesu groups-io,  ve3rwj asinine attacks was read by the moderator, ve3rwj as I am a representative of Canada.
Maybe he, ve3rwj had his ego: “As you’ve been told”.  —- VE3W/ZW Never spoken to the person VE3W|ZW, clearly a bias existed.   A few of the groups-io moderators felt the attack was disgusting and noted his remarks abusive, defamation.  Said disappointing coming from a Canadian.
-  It was written as the third attack in this group causing a banned from the YAESU groups-io.
https://groups.io/g/YaesuSystemFusion